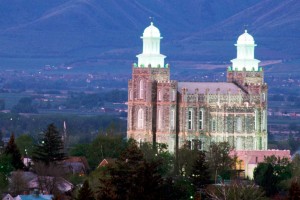 Over the last few weeks, George and I have been having some in depth discussions with a couple of Mormons who are seeking to share their faith in Woking. Mormons often initially pose as Christians, claiming to be true Christian believers, while the rest of the church remains apostate. Yet the beliefs and history of this strange sect are more sinister than their cheery, indefatigable and polite young missionaries appreciate. Since 1820 when Joseph Smith founded the Mormon sect, evangelical Christians have been able to show how Mormonism is a false gospel and its prophets are wolves in sheep’s clothing. However, recently Joel Osteen, an American spokesman for one stream of “evangelicalism”, when interviewed on CNN, claimed that while Mormonism is not traditional Christianity, he still views them as “brothers in Christ.” This is extremely naive and concerning since Mormons are dangerously anti-gospel  in all areas of doctrine thus promoting a false gospel based on the teachings of corrupt, polygamous, polyandrous so called prophets. In what areas are Mormon beliefs so different?

1. The doctrine of God
Mormons believe that God the Father was once a man.
According to the Church of Jesus Christ of Latter-Day Saints Doctrine and Covenants, “The Father has a body of flesh and bones as tangible as man’s; the Son also;” but “The Holy Ghost has not a body of flesh and bones, but is a personage of Spirit.” Yet the bible teaches that God is Spirit, uncreated and the source of life

2. Jesus
Mormons believe that Jesus Christ was the firstborn spirit-child of the heavenly Father and a heavenly Mother. Jesus then progressed to deity in the spirit world. He was later physically conceived in Mary’s womb, as the literal “only begotten” Son of God the Father in the flesh (though many present-day Mormons remain somewhat vague as to how this occurred. The Bible presents Jesus as the eternal Son of God through whom the worlds were made (John 1, Hebrews 1)

3. Salvation
Volume One of Doctrines of Salvation says this about Joseph Smith: “No salvation without accepting Joseph Smith. If Joseph Smith was verily a prophet, and if he told the truth…then this knowledge is of the most vital importance to the entire world. No man can reject that testimony without incurring the most dreadful consequences, for he cannot enter the Kingdom of God.”

The Mormon church teaches that all men will receive a degree of salvation and that there is no place known as hell. By incorporating this doctrine into the church, they have attempted to undercut the explicit teachings of the Bible. Furthermore, the church teaches that it ALONE is the only hope for salvation. Bruce McConkie, the Mormon scholar, says this regarding salvation: “If it had not been for Joseph Smith and the restoration, there would be no salvation. There is no salvation outside of the church of Jesus Christ of Latter-day Saints.”

Even more sinister is the doctrine of “blood atonement” taught by the early prophets of the Church of the latter day Saints. Joseph Smith, the founder of the Mormon religion and its first prophet, taught that certain sins were so so serious as to put the sinner “beyond the reach of the atoning blood of Christ.” For these fallen sinners, their “only hope” lay in having “their own blood shed to atone.” Smith made clear that the shedding of “innocent blood” (including killing anyone less than eight years old, the age of accountability in Mormon teaching) was an unpardonable sin which, along with failing to keep their covenants or betraying their testimonies, could lead to eternal damnation. In Smith’s theology, the doctrine applied only to Mormons, but it was widely viewed as providing justification for shedding the blood of apostates.

Brigham Young took the doctrine of blood atonement further than Smith. According to historian Juanita Brooks, “Young advocated and preached it without compromise.” Young, in an 1857 fire-and-brimstone sermon, demanded to know whether his his flock would have the courage to do what was necessary should a fellow Mormon commit an unforgiveable sin: “Will you love that man or woman well enough to shed his blood?” Some sinners, Young preached, who are “now angels to the devil” could have been saved if only some among their Mormon brethren would have “spilled their blood on the ground as a smoking incense to the almighty.”

This doctrine contributed to the culture of extreme violence that marred the history of early Utah. The sermons of Brigham Young undoubtedly inspired his followers to commit murder, however unfair might have been the popular press’s willingness to blame every violent act in the territory to blood atonement.

Our Mormon friends conduct themselves in a very polite manner but unlike gospel Christians they have no evidence for their faith. Though Mormons are told archaeology corroborates the book of Mormon, the reverse is actually true. This is confirmed by honest Mormon scholars from Brigham Young University. One scholar says this:
“. . .It appears that the Book of Mormon had no place in the New World whatsoever … [It] just doesn’t seem to fit anything … in anthropology [or] history…. It seems misplaced. . .The first myth that we need to eliminate is that Book of Mormon archaeology exists.  (Dr. Dee Green, Former Editor of the University Archaeological Society Newsletter : A Journal of Mormon Thought, 4, No.2 (Summer 1969), pp.77-78.)

Unlike the Bible, whose main narratives are supported by plentiful archaeological evidence found in modern day Palestine, Syria, Turkey, Greece, Iran, Iraq. No evidence supports the book of Mormon’s narratives set in the Americas between about 600 BC  and  AD 400.  Furthermore, the book of Mormon contains numerous anachronisms including horses, cattle, other livestock, flora and fauna and various forms of technology which were unknown in the Amercicas at that time.

The witness of the Spirit?

Our friends were fairly orthodox Mormons in the way they responded to this evidence and the evidence for the bible. They said that the Holy Spirit confirms that the book of Mormon is true and the passion and commitment of their lives is the evidence they rely on. However, many people are passionate about all sorts of things. Hitler was an incredibly passionate young man who was convinced he was right. Feelings can be extremely misleading. External evidence is needed. Mormonism fails that test. George and I pleaded with these guys to examine the evidence, read the bible and not rely on teachings from the Church of the latter day saints. We were helped very much by this website: http://www.bethinking.org/mormons/what-to-say-to-mormons/6-mormon-evidences which concludes with this great illustration:

Suppose you learned that some stock you had inherited from your parents would soon be worthless because the company had just announced that it was going out of business. You may not like that fact, but you would welcome an opportunity to sell the stock and get out of it before losing it all. Then you could put your money in a safe place. If you would do that with your money, how much more with your eternal soul! Why hold on to a false hope and lose everything when you have the opportunity to embrace the truth and be saved?”

For all our arguments and evidence, it is only the Holy Spirit who can lift the veil from our eyes. We do pray that for those guys.