Chiang Mai is a centre for mission of all kinds. One particular focus of outreach are the hill tribes located mainly to the north and west. Several folks from our house church are involved in reaching out to the Shan people and other minorities.

Matt Coe, our neighbour, who is the advancement director at Grace International School, had a burden several years ago that the school should also be involved in outreach to the disadvantaged and persecuted Karen people. The Karen are another diverse people group who have fled over the border to escape Burmese soldiers, who in some cases had been ordered to clear their land and raze their villages to the ground. 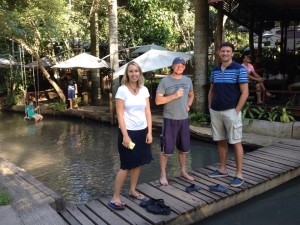 Although the situation is marginally better in Burma now, the minority people groups have suffered much at the hands of an army who sought their elimination. Karen state, in Myanmar remains full of deadly land-mines. Matt’s burden was to link up with a migrant school called Thoo mweh khee school on the Burmese border and set up an exchange. This exchange programme has been running now for six years.

Last week, Grace again welcomed a contingent of around seventy students and half a dozen teachers from the school. Ann and I hosted two Karen girls for four nights. The Karen are mostly animistic or Buddhist in religion but many are also Christian. Our girls were both Christians who wanted to pursue careers in one case as a teacher and in another as a Pastor! The experience was eye opening for all of us. The girls had not used electric showers or flushed toilets before. I had the incredible privilege of teaching all seventy of them the story of Hosea which graphically portrays God’s outrageous and persistent love to those who have spurned and rejected his advances. 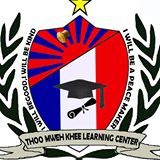 This was not my first interaction with Karen people. While Pastor at Send Evangelical Church in 2008, I took the opportunity to visit our long term missionaries Robin and Rosemary who had spent the prime years of their life discipling a small group of believers among the Pwo Karen people. I spent a week with them in the village observing the corn harvest, the translation work and a hosue church service in Pwo Karen.

Robin and Rosemary also came to visit us two weeks ago in Chiang Mai where their mission was hosting its annual field conference.

We have a great house here in World Club land and though it has taken a long time to obtain the appliances we need ( we very much miss our bath and dishwasher) we have recently been able to open up our home and also host house church here. 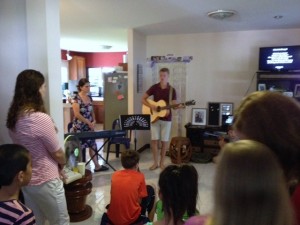 These last few weeks have been very busy for all of us. Lois has excelled in swimming, winning a gold medal in breaststroke at her first swim meet. Josiah is being stretched with extra classes to accommodate his advanced abilities in maths and Sam is playing soccer every Saturday morning. Isaac is slightly more settled at nursery which is a great answer to prayer.

For Ann and I our next major adventure will be travelling to Phuket on 28th November where I will be conducting a wedding and preaching for Andy and Sharon Cheung. Andy was a former volunteer with Friends International and attended Send Evangelical Church for a season. We need your prayers for enabling us to sort out the practicalities including child care and cover for the lessons from which I will be absent. These have caused us some stress in recent days as plans we had in place have needed to be re-arranged. Andy and Sharon would also appreciate prayer as this wedding has had to be rescheduled. and new locations found, several times.

Thank you so much for your prayers and support. Truly we are completely reliant on you and on our great God.