This week I assigned my class the task of writing a blog in order to link the movie ‘Divergent’ to the Christian gospel. Here is my attempt. 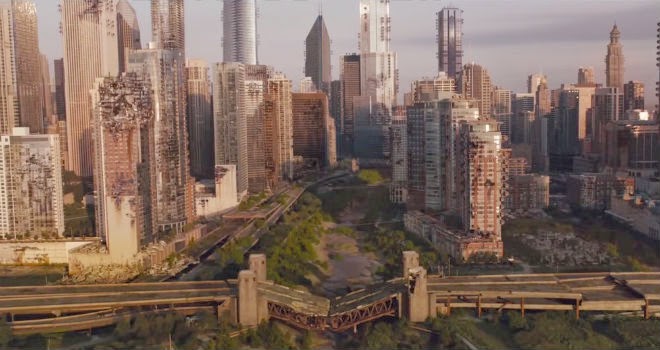 The city is Chicago. The protagonist is a sixteen year old called Tris. The date is the day that young people must choose which faction they will belong to, in order to contribute to society for the rest of their lives. Each young person has taken a simulation test in order to guide their choice. As Tris narrates: ‘ Decades ago our ancestors realized that it is not political ideology, religious belief, race or nationalism that is to blame for a warring world. Rather, they determined that it was the fault of human personality- of humankind’s inclination toward evil, in whatever form that is. They divided into factions that sought to eradicate those qualities they believed responsible for the world’s disarray.’ (p42)

All the five factions gather to witness the choosing ceremony.

The factions divide into God given characteristics. Tris and her brother Caleb are born into an Abnegation family. Abnegation are the selfless faction that serve the faction-less poor in the city. They reject vanity, dress in drab plain clothes and are regarded by the other factions as ‘ stiffs.’ On the opposite extreme are ‘Dauntless.’ This courageous faction police the city. They embrace risk but are reckless and end up causing danger. Amity love peace and live a simple life but they are unprepared to stand up and fight when it is needed. Candour love transparency but tend to speak the truth in inappropriate ways. Erudite are the scientists, the researchers and philosophers but they end up using their knowledge for evil means.

Divergent, like a modern Lord of the Flies,  elucidates the biblical doctrine of human depravity. It is human sin that is to blame for all the ills in society and humans cannot fix it.

In the last two centuries various political theories have been put into practice by governments across the world: Feudalism, Absolute monarchy, Apartheid, Fascism, Communism, Islamic theocracy and democracy. All have failed, and alongside various economic theories, are destined to fail. The heart of the problem is not lack of education but rather the problem of the human heart. As Jeremiah the prophet wrote 2,700 years ago: ‘ . . . the human heart is deceitful above all things, and desperately sick.’

Tris corroborates this assessment of human nature when she writes: ‘ human reason can excuse any evil; that is why it’s so important that we don’t rely on it.’

Tris chose to embrace the ‘ Dauntless’ faction, throwing off the shackles of her legalistic past. But her test results had proven inconclusive. Her proclivity was to several factions. She experienced the teenager’s worst nightmare. She did not fit in. As a result she is targeted by administrators of the society. Yet Tris herself, and her love interest ‘Four’ are flawed individuals who make rash choices and find themselves unable to overcome murderous forces that are too strong for them.

Divergent points us by way of contrast to a world we long for which is free of manipulation, injustice, violence greed, perversion and evil. Our aspirations for this kind of world are only met in the truly Divergent saviour Jesus Christ. In the greatest act of dauntless abnegation, he confronted the hypocritical religious elite and died in order to pay the penalty that, warped and perverted humanity, deserves to pay.

Because he rose again, the last unfulfilled prophesies of the bible state that Jesus will return in order to redeem this fallen world to effect its complete redemption and as JR Tolkein wrote in Lord of the Rings: ‘ make everything sad become untrue.’ Only He can do it.

The momentous choice all young people made on choosing day is eclipsed in significance by the choice all humans are called to make today. The choice is to serve King Jesus or to serve king self. As the aging leader Joshua charged the Israelites several thousands of years ago: ‘ . . .And if it is evil in your eyes to serve the Lord, choose this day whom you will serve . .’ (Joshua 24:15)